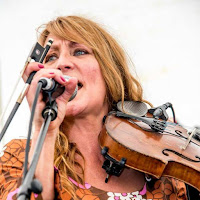 Gaynor Wilson is a singer songwriter originally from Ashton under Lyne, now living in Saddleworth. Gaynor plays both violin and piano although she is best known as a singer with a powerful stage presence that commands the full attention of her audience. Gaynor especially enjoys the freedom of acoustic singing and the intimate audiences found in acoustic and folk clubs where the potency of her performance is witnessed to it's full effect. 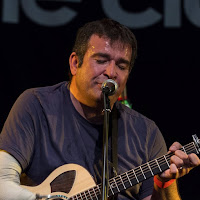 Paul McGladdery is a singer songwriter from Saddleworth. He is a guitarist known for his prolific songwriting encompassing a variety of styles and influences from folk to country to classic pop. Primarily, Paul loves to write a ballad and his songs "Cherry Blossom" "View" and "Daydream #1" are often the high points of the couples performance. Paul also enjoys a cruel sense of humour and this regularly translates into his lyrics of songs such as "Nudist Camp" and the Attention Seekers series he writes for the Wilson McGladdery Facebook page. 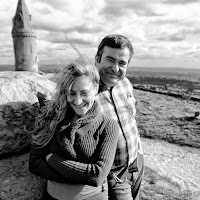 Gaynor and Paul met through fellow musicians. After initial rehearsals, they realised their voices blended well together and that they shared a common goal to promote their original songs rather than plough the well worn furrow of covering famous songs. They decided to join forces to enhance the reputations and audiences they had built as both solo artists and working with bands. Their strong friendship shows in their performances, which are witty, heartfelt and a feast of original material.
As we travel around from town to town in "Vita" Paul's trusty Ford, here are some of comments we've received from some of the venue's we've played recently. We like the common reference to our songs being well crafted :)

I'd like to thank you again for the amazing set you performed for SAW Acoustic Music on Sunday afternoon. Guitar, violin & vocals, especially the harmonies, were enjoyed by everyone and I've asked you back ASAP. You both had a relaxed manner and great sense of humour. Keep writing the songs and we'll see/hear you again soon." SAW Acoustic Music New Cumnock

Thanks to fantastic acoustic duo Wilson McGladdery for their big-hearted and elevating music." Square Chapel Centre for the Arts, Halifax

Visiting us from Saddleworth Lancs, folky(ish) duo, Gaynor Wilson and Paul McGladdery gave us superb singing/harmonies, lovely fiddle and guitar playing and a brilliant set of finely crafted songs, my personal favourite, "40", taking a satirical swipe at the significance of the number in relation to the biblical/religious matters. By this time the place had filled up nicely and Paul and Gaynor had won the crowd over with their wonderful playing and attractive personalities. They left us for their long drive home asking if they could return; no problem at all." Surf Café, Tynemouth

Marsh Blues and Folk Club Huddersfield would like to thank Gaynor and Paul, for playing a wonderful set, all original material, well crafted and superbly performed. Welcome back anytime, great stuff guys thanks"

A fantastic opening set from Gaynor Wilson and Paul McGladdery, some stunning self penned songs and to all my promoter friends out there, A MUST BOOK!!! Check them out." Thursday Acoustic Sessions @ the Black Bull, Haworth

And so we came to our final meeting of the year, the highlight of which was a brilliant star turn by Gaynor Wilson and Paul McGladdery. They gave us a selection of their fine self - penned songs complete with tight harmonies and an engaging stage presence" Timperley Folk Club, Timperley, Manchester