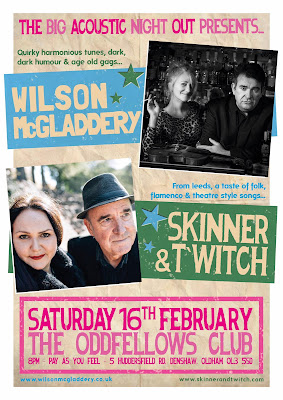 Skinner & T'witch and Wilson McGladdery are very much looking forward to playing one of their Big Acoustic Nights Out at The Oddfellows Club, Denshaw, Oldham OL3 5SD on Saturday, February 16th, from 8pm.

Wilson McGladdery - Gaynor Wilson is a singer songwriter who plays both violin and piano, although she is best known as a singer with a powerful stage presence that commands the full attention of her audience. Gaynor especially enjoys the freedom of acoustic singing and the intimate audiences found in acoustic and folk clubs, where the potency of her performance is witnessed to its full effect. Paul McGladdery is a singer songwriter and guitarist, known for his prolific songwriting encompassing a variety of styles and influences from folk to country to classic pop. Primarily, Paul loves to write a ballad, and he enjoys a cruel sense of humour that regularly translates into his lyrics.


Gaynor and Paul decided to join forces to enhance the reputations and audiences they had built as both solo artists and working with bands. Their strong friendship shows in their performances, which are witty, heartfelt and a feast of original material.

‘The one and only Skinner & T'witch...a pair of comic geniuses'. David Chamberlain, Acoustic Routes, Dapper FM/Blues and Roots Radio

‘Skinner & T’witch have been described as “a pair of comic geniuses” and I would not disagree - they are unique: there is nobody to compare them with’. Tom Brown, The Living Tradition

'Steve (Skinner) ought to rate himself as one of the best songwriters, because he's really outstanding'. Doug Welch, KentFolk, BBC Radio Kent

'T'witch has a hell of a voice, and she knows how to use it'. Liz Franklin, The Folk Garden, Blues and Roots Radio/Eden Folk, Eden FM

'If you get the chance to see them anywhere, please do yourself a favour, grab it with both hands'. Marianne Doig, Leith Folk Club